When I Painted My Hair Red...

I ruffled through the pages of my diary to figure out when was that moment in history when I made that quirkiest decision of my life. the one I have always been wanting to take. Not for one, two years, but for ages I could remember

To be honest, the color wasn’t pre-decided. It was anything far from black. And one I wouldn’t regret. But for someone with this desire to color the hair for ages, I hardly made a search to finalize on the precision of vibrancy. I did one thing which 93.45% girls do. Ping BFF. I pinged my best friend who should at least by then block me for my incessantly pinging her and bothering amidst her regular chores. Red may look good on you, she said sharing a few pics, which I took exactly to the bestest salon in the city of Chennai. Trust me, as someone having a hair of good texture (Well, not bragging, if anything I would only tie it to heredity, the fact that everyone in my family has it, from grandfather till granddaughter), the last thing I would do was spend lots of bucks on styling my hair, least of all coloring, one every one in my family was opposed to. Yet, I did. Just like everything else, I do.

I went to one of the best salons at Teynampet, and they made me wait at the bay next to reception, where a few minutes later they sent a tall,  handsome guy, who was going to style my hair, that would change my entire one year from then. But the limelight wasn’t any of that, it rather was the woman who sat next to me, with her pre-decided copper blue variant on coloring, and you know who that woman was? Famous Tamil actress “Bindu Maadhavi”. Tinsel town had its crowd walking in and out this salon every now and then. I sat glued at the bay with my eyes lodged onto the sample style, that I showed to Ronald, the guy who was going to color my hair then. Not able to speak the language of a stylist or women who frequent their visits to parlor, I showed him the picture saying, “I want like this, the color, the style and the bottom fadeout, can you do that, can you?”

He looked at it for like 5 seconds, said some terms, and told, “Sure, we can do this.”

“Sure, we can? Exact same?” I reiterated, to which he nodded and we went to the hair cut area which then seemed like Mahal of mirrors of Rajasthan. As someone who thought attention was the last thing she needed, I had in ten minutes, 4 stylists operating on my head. I felt like a patient with 4 neurosurgeons around on a “Awake craniotomy”, but that is little zyada. Yet, I had 4 stylists, one trimming my hair, other holding a tuft in a peculiar angle, and other already getting ready to de-color the black, and one more taking the foils ready. I felt different but as not as different as I was gonna feel a few minutes later. One strand at a time, one tuft at a time, in a dramatic way, I was losing who I was and was transforming to something else or better, someone else, I wondered if I would ever feel the same way when I look into the mirror, or when I take selfie, if it would be different. If so, good different or bad different or whatever. For someone who has thought this hair coloring thing through for ages, I still had too many questions in my head unanswered. Should I stop all of this and walk away, thinking it is not too late to stay the way I am. Just adore the black beauty, and not change a bit of it. But what I didn’t realize was my hair was half way bleached already by the time I was processing these questions and trying to answer each of them, so there Is no going back, else I might as well look like singer Sia Kate, when she had half black and white. So I sat through, tossing few more questions in my head like I just decided to sit through a shaadi without thinking about the guy, and I ruminated over and over. And one good thing to all of this was - the Tamil heroine was seated right beside me. So whenever I took a pause from my mind-breaking thought process, I had my eyes lodged on to her styling process. It wasn’t copper blue. The Color, it was Royal Blue, my favorite color. Only I wouldn’t want it on hair. Royal Blue streaks, good choice, I thought. She was happy, she enjoyed the change she was undergoing, the only thing that would have probably caused her discomfort was the woman next to her, starring without blinking her eyes. So I had to shift attention to elsewhere and it went back to my head. And it was scary because in a few moments from then, I became a barbeque chicken dressed in desi masalas and covered in aluminum foil, except for the fact my head was the chicken and instead of masalas I had bloody beautiful red variant applied all over my hair. I couldn’t help but wonder what if it gets to something like crimson red. Would I be able to live with it?

But hours went by, it started settling in, the sun disappeared, possibly into my hair, lending me some of its redness, and with time I got comfortable too. My questions weren’t questions anymore; they were only moments of wonderment of how my new style was gonna look. The heroine got done with her streaks and vanished like a feather in air, bidding everyone a bye, moment I regretted I didn’t take a selfie with her. Well TBH I can’t look like a barbequed chicken and have my picture clicked next to a cute actress. It might only add salt to suffering. I let the moment pass, as if she and I were neighbors and I might as well see her the next day or the next month. “Remember Red! Hope is a good thing, may be best of things and no good thing ever dies.”Sssh!!! Not to use the beautiful quote from Shawshank Redemption at this mid-life crisis moment, but it still was a perfect fit, Wasn’t it?

“We are ready Ma’am” Ronald said. That is when I realized, they are going to get me to reality.  They are gonna wash the magic off my hair only to re-create another version that was going to last forever. Read it right –Last forever, unlike mid 20s relationship. We walked up to the wash bay, with fancy stuffs, which is when I realized I was the last customer left in the parlor. Receptionists, Ronald , and apparently every other soul in Teynampet that time wanted me to get done with this, so they could go back to their home peacefully and get onto their bed whining about this customer who came today with a picture in her hand like a lost kid in exhibition.

The faucet was opened and with every drop that fell onto my hair, I felt I walked close to reality, only this time it’s a new reality and I would have a different dimension, something that is tinted with red. And have the entire world look at me different and stare back at them with the consolation, “Nothing wrong, nothing wrong, they are just starring at the redness of your hair, it is all cool” typical thing any woman had to tell herself when the world is nothing but one giant dot, staring at you like you are spoiled art.

In few minutes it was all done, and I knew I was as scared as I was excited, as happy as I was worried, as red as I was black, and I knew for once, I was ready to look at the newer version, like a chicklet that has   just gotten birth. I kept my head down or rather eyes partially shut as Ronald and 3+ stylists then got the hair dried and started curling it. Haa, curling, my favorite part. As someone stuck with straight hair for long, I liked having intermittent curls, one I adore like chai guy adores once in a while ice-cream or vice versa. The curling was done; the setting-the-hair-right part was done. He dropped the comb safely back to where it belonged. And he said the words I was waiting to hear for hours then.
“It’s Done., You may look up now.”

I looked up, still not ready to face the fate I changed for myself. Redness was glaring from crown till curl, the color had changed then completely. There was a smile on my face, one I couldn’t control, one I was trying to hide, I smiled like a kid that cried for candy and got it finally. It went till ears, and that moment I knew I didn’t make the world’s worst decision, I knew I didn’t hate that version of me and that my bucket-list could then be ticked off. I pushed back my red colored voluminous tuft and looked at Ronald and said , "Thank you, that was Job Well-done”.

He smiled and vanished towards the end of his day with glee,
And so me, only with a brighter and redder version of me. 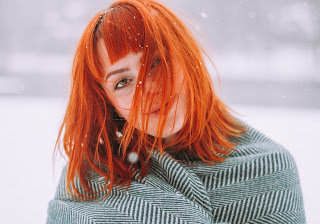 Popular posts from this blog

A LOVE WITH VAMPIRE 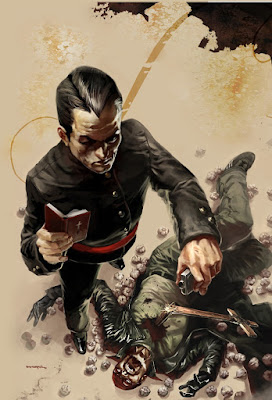 That was a Tuesday morning; her nokia phone on wooden table seemed blinking with new text. She unlocked and opened the msg. It read-- "I'LL B CMNG TO C U TIS EVNG! ! " Before her eye took a wink, her heart dumped in mysterious sea of curiosity, expelled virtually &danced in ecstasy! With her feet fleeting in air, she was on cloud nine :-) It was Ankrit, her one and only-Special one. The word special itself means a lot to her.. Ankrit, a young Adonis , lil childish, lil responsible, and more practical... A mixture of everything she expects, in a right proportion. Never her stubborn heart imagined she could fall head over heels for him..., until that night came !! 27th of May [ Coupe de foudre !! ] The hands on the huge clock touched 12.,sounds of which echoed till the graveyard end. It was a midnight. Trees were slowly withering their yellow leaves...Dogs howl that was the usual rhythm, of that area. Got replaced by a mellifluous voi
Read more

From morning alarms till late night calls  , from fight at bathroom door till missing the room keys... everything reminds me of infosys , mysore... the real place to be.... where sophisticated rooms and facilities , provided to trainees , makes them forget -they are just yet another color tag roaming in that beautiful campus. the word color tag , stayed a big pang inside our heart .... for every color tag had regular bag checks while entering GEC's while moving to multiplexes.. while leaving classes and while .... no that 's enough.... more  than enough.... Color tags.... red , dark blue , grey , white , orange , for the first time I hated colors in my life... We were all straining..., toiling & moiling day and night to get that ONE BLACK TAG !! That was the first time  , we worked for black...... something dark black always reminds me of dark, sorrow, and every other negative feel That was the day that taught us the real meaning behind 'black
Read more

Nivedhitha
Nivedhitha is an avid blogger , writer and poet who has published lots of articles in various online magazines and sites. She worked in an IT industry and is currently pursuing her MBA from NMIMS,Mumbai. She strongly believes writing is a way to unleash one's creativity. Let's start spinning!